The “post 10 albums in 10 days with no commentary” thing has been going around Facebook again. I was thinking about posting mine, but then, Dylan Lloyd went ahead and nominated me to do it. I am not going to choose anyone, but I will do is share here how the album influenced my life. 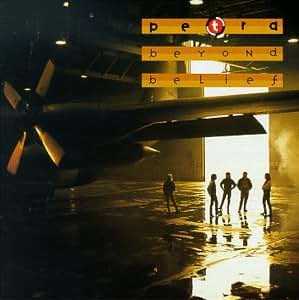 I grew up in Greenville, Pennsylvania. Well, that was my address. I lived 7 or 8 miles outside of Greenville in a different school district. Greenville is a beautiful small town that has been slowing dying with the end of manufacturing and the steel industry in Western Pennsylvania. There were a couple of stores that Mom took us to that I would enjoy. One was Amy’s Books. Mom would trade in books and let us pick out some books of our own. I would pick up some Hardy Boys books and have them read a day later.

Just down from Amy’s Book was The Bible Gift Shop (Shoppe?). It was a small store with plenty of Jesus Junk in it. The owner was super friendly and involved in youth ministry in their church. This small store had some great music selection in the Christian scene. If you were listening to Christian rock in the 1980’s, then you likely listened to Petra. Petra was the first cassette that I remember buying at The Bible Gift Shop. That album was Beyond Belief.

By 1990, when Beyond Belief came out, Petra was already veterans of the Christian rock scene. Beyond Belief was the second album with John Schlitt as their lead singer. Beyond Belief isn’t heavy metal, but probably closer to arena rock. It is listed as No. 71 on the list of the 100 Top CCM Albums.

I had the opportunity to go see them at the Star Lake Amphitheater outside of Pittsburgh with the youth group. I remember Geoff Moore and the Distance opening for Petra. This would have been my first “rock” concert but more than a really fun concert with the youth group, Petra’s music encouraged my faith. Songs like Creed (Apostle’s Creed inspired song), Seen and not Heard (letting actions speak louder than words), and Beyond Belief (living by faith) were all songs that encouraged me every day I listened.

Petra had a run of three albums, This Means War, Beyond Belief, and Unseen Power that pretty much sum up my musical taste from 12-14 years old. There would be big changes in the music I would purchase starting with tomorrow’s album.