Across the street from our hotel is Yuexiu Park. It is a large park that we got to explore when we adopted Malachi and visited again today, with Chloe and Caleb. The park is lush and beautiful. Even after a couple of visits, we have not seen anywhere close to the entire park.

We were told during our first trip to China that the parks are the center of community-especially for those who are retired. The parks function as a meeting space, exercise space, a place to practice the arts, and a place to be entertained. In short, the parks are a outdoor senior center (that everyone can benefit from). 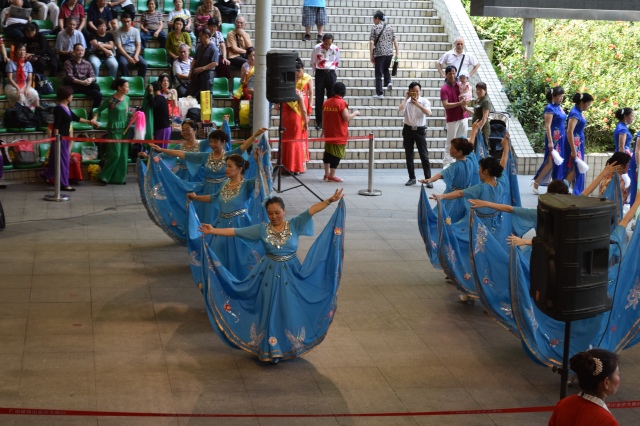 We were able to sit and watch a, for a lack of a better word, talent show that was happening at the amphitheater. There were groups in colorful costumes doing dances and singing songs. (For those in the Caesar Rodney Immersion Program, it feels/looks a lot like the Chinese New Year Celebration at Delaware State University.) The show started at 9:30 and ended at 11:30 a.m. before the real heat set in. There was a schedule set up and there are shows nearly every day in for people to participate in and watch. There were well over 100 people watching the show.

Instrumentalist would meet up with friends and jam, people would gathering around and play hacky-sack (Chinese version), and there were all sorts of exercise/Tai-Chi/dances going on with fans, umbrellas, and badminton rackets. The park is beautiful botanically. There were wonderfully landscaped areas, and orchid house, and traditional Chinese architecture throughout.

In short, the parks (like Yuexiu) provide space for the well-being of the individual and the community. It is a part of China that is beautiful and exciting to observe.