LeBron James, Dan Gilbert and the Danger of Being Impulsive 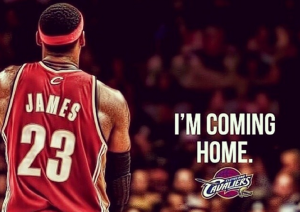 By now, you’ve heard the news that LeBron James is heading back home to Cleveland as he re-signs with the Cavaliers. This comes after famously leaving Cleveland for Miami in “The Decision”- and ill-fated decision on James’ camp. “The Decision” left a bad taste in the mouth of Cleveland fans- and especially their owner, Dan Gilbert. Gilbert fired off a letter claiming James left in a “cowardly betrayal” and claiming the Cleveland would win a title without James before LeBron would win one in Miami (Miami has been to four straight Championship games-winning two- while Cleveland has led the league in #1 draft picks)

USAToday ran an article this morning about how Gilbert and James buried the hatchet after Gilbert’s letter. One of Gilbert’s quotes is appropriate for leaders consider when we deal with things that do not go our way. Gilbert said,

“There were a couple of people who tried to talk me out of it [the letter],” Gilbert tells me via phone from California. “Frankly, I didn’t put it in front of enough people. It was boom-boom, put it up. That’s something I’ve learned. When you’re in an emotional state … wait.”

Gilbert highlights to problem that everyone- especially those in leadership- can have when we respond impulsively to the circumstances around us. Gilbert was obviously upset (I’m sure that is put mildly) when Lebron went to Miami and pounded out a letter about how he felt. He posted it online- where everything lives forever- without running it through enough filters.

Honestly, I know that I have spoken impulsively before. Perhaps you have to. I was always taught to think before I spoke, but even then I could think I really wanted to blow a person up verbally! I do better online- but see people responding impulsively and/or passive aggressively in Facebook post or Twitter updates. We all can fall prey to responding impulsively.

So how do we avoid responding impulsively when we really want to?

1. If you feel you have to respond NOW- it may be a warning to slow down: This is often a indicator of our need to defend ourselves. In the world of Facebook and Twitter, it is so easy to respond now. But I have found that there is rarely anything that needs an immediate response- especially when our emotions are involved.

2. Write out your thoughts/response on paper first: This saves us from accidentally hitting send/post/tweet and posting our impulsive thoughts for the digital world to read. Write out all your emotions on paper as if you were journaling. Then put the paper away. Come back to it a few hours later- or even a few days later- and see if that is what you really want everyone to read.

3. Surround yourself with people who can act as filters: I personally need people in my life that I can share what I am really feeling- no matter how raw the emotion- and trust that they will help me process what I feel and move forward in a healthy way. There are a few people I send drafts of letters/emails/responses to get their input on. Because I trust them, I value their input and if they don’t feel I should post- or need to make major revisions, I do it. This is part of my accountability as a leader.

The letter that Gilbert wrote in a few minutes has characterized him over the last four years and it was potentially a road block for the best basketball player in the world coming back to Cleveland. Gilbert was given a second chance and the opportunity to clear the air with LeBron- as leaders, we are not always given a second chance when we respond impulsively and must respond to our critics in thoughtful, helpful, and appropriate ways.

How do you respond to critics? What system do you have in place when you have a difficult or emotional response that you want make?