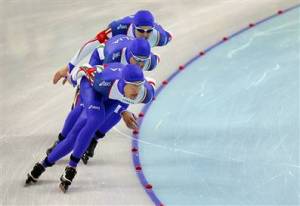 I was thinking back over the Winter Olympics the other day.  I’m not a huge Winter Olympics fan, but each night Andrea and I found ourselves watching the Olympics.  One of the events that I found intriguing was the Men’s Team Pursuit Speed Skating.  I saw the final between Canada and America.  The sport consist of a team of three skaters who skate at the same time.  The skate in a single file line- trying to synchronize their motions.  At the end of the race, the attempt to skate side by side as they cross the finish line because the last skate to cross the line is where the judges count the time.  As the announcer said on the final lap, you are only as fast as your slowest skater.

It’s like that in our Christian communities as well.

I hear and read much conversation about the freedom we have in Christ for various pursuits.  For example- I’m around Christians who enjoy a beer from time to time, and they are right in saying that the Bible doesn’t prohibit the comsumption of alchohol (although it’s pretty clear on drunkeness). Other areas are media consumption, language, and even co-habitating (we’re not having sex, just living in the same house/apartment).  I think much of this is a backlash against legalism in the church as they strive to enforce a “Christian morality.”

In Romans 14, Paul is writing about weak and strong Christians.  The weak Christians are those who are unable/unwilling to give up certain observances such as dietary laws or the Sabbath.  For Paul, and the strong or mature Christian- the taboos no longer apply- Yet if Paul or another Christian were to eat a food that was previous “unclean” in front of a person who is not at the same place as Paul- then Paul may cause the “weaker Christian” to stumble.  This is what Paul says:

“Let us therefore make every effort to do what leads to peace and to mutual edification.  Do not destroy the work of God for the sake of food.  All food is clean, but it is wrong for a man to eat anything that causes someone else to stumble.  It is better not to eat meat or drink wine or to do anything else that will cause your brother to fall.”  (Romans 14:19-21 NIV)

For Paul, it was an issue of the food or wine that they drank.  There are issues today that we ask Christians engage in without consideration of how it affects the community we are in.  Is it worth having a couple beers if it causes a brother or sister to stumble/question their faith?  Does our sarcasm cause another person to sin?  I don’t think we like to ask these sort of questions because we are very individualistic in America (and the West) and rarely consider how our actions affect our community- but they do! Paul says that we should make every effort to do things that edify (build up) our brothers and sisters in our community.

For me, that means denying myself of some extras in life that may be seemingly harmless, but may cause someone else to question their faith or mine.  Our lives are not our own.  They are a living witness and testimony to the God we serve and the faith community we participate in.  Our communities of faith are only as strong as our “weakest” participant.  The entire life of the community is to work to build up faith (edify) and to continually seek maturity in Christ.

In what ways does your Church and/or your life build up and edify those who are “weaker” or less mature in their faith?  Do you actions/life put out a stumbling block or set the pace?

Husband of Andrea and father of four amazing children. Pastor at Avenue United Methodist Church in Milford, Delaware.
View all posts by Steve LaMotte →
This entry was posted in Bible Thought. Bookmark the permalink.